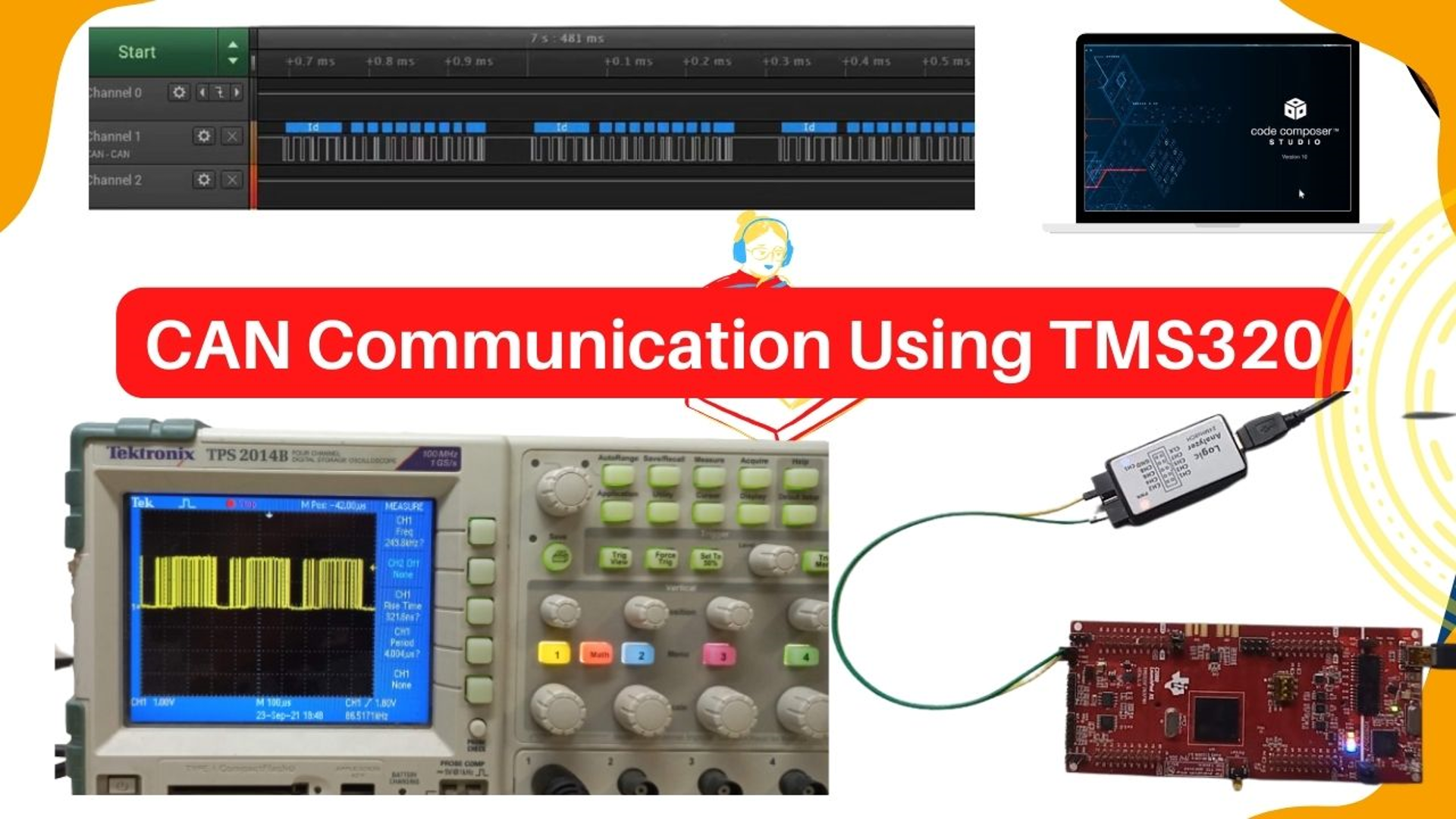 The CAN bus was developed by BOSCH (1) as a mufti-master, message broadcast system that specifies a maximum signalling rate of 1 megabit per second (bps). Unlike a traditional network such as USB or Ethernet, CAN does not send large blocks of data point-to-point from node A to node B under the supervision of a central bus master. In a CAN network, many short messages like temperature or RPM are broadcast to the entire network, which provides for data consistency in every node of the system. Once CAN basics such as message format, message identifiers, and bit-wise arbitration — a major benefit of the CAN signalling scheme are explained, a CAN bus implementation is examined, typical waveforms presented, and transceiver features examined.

In this workshop we are interfacing can using tms320

To interface can communication we are using CAN_B Port for data transmission and receive.

What are some real-world applications of CAN?

Why is CAN used?

CAN bus Communication Speed and Distance

How CAN Communication Protocol works?

The CAN communication protocol is a carrier-sense, multiple-access protocol with collision detection and arbitration on message priority (CSMA/CD+AMP). CSMA means that each node on a bus must wait for a prescribed period of inactivity before attempting to send a message. CD+AMP means that collisions are resolved through a bit-wise arbitration, based on a preprogrammed priority of each message in the identifier field of a message.

CAN has four frame types:

There are two types of data frames,

// Initialize the transmit message object used for sending CAN messages.

The frame format is as follows: The bit values are described for CAN-LO signal.

As shown in Figure 3, the Extended CAN message is the same as the Standard message with the addition of:

Summary: “Hello everyone, can somebody please produce the data labelled X?”

The Remote Frame is just like the Data Frame, with two important differences:

It is explicitly marked as a Remote Frame (the RTR bit in the Arbitration Field is recessive), and there is no Data Field.

Remote Frames can be used to implement a type of request-response type of bus traffic management. In practice, however, the Remote Frame is little used. It is also worth noting that the CAN standard does not prescribe the behaviour outlined here. Most CAN controllers can be programmed either to automatically respond to a Remote Frame or to notify the local CPU instead.

There’s one catch with the Remote Frame: the Data Length Code must be set to the length of the expected response message. Otherwise, the arbitration will not work.

Sometimes it is claimed that the node responding to the Remote Frame is starting its transmission as soon as the identifier is recognized, thereby “filling up” the empty Remote Frame. This is not the case.

The CAN Data Frame

The CAN data frame is composed of seven fields: Start of the frame (SOF), arbitration, control, data, cyclical redundancy check (CRC), acknowledge (ACK) and end of frame (EOF). CAN message bits are referred to as “dominant” (0) or “recessive” (1). The SOF field consists of one dominant bit. All network nodes waiting to transmit synchronize with the SOF and begin transmitting at the same time. An arbitration scheme determines which of the nodes attempting to transmit will actually control the bus.

The arbitration field of the CAN message consists of an 11- or 29-bit identifier and a remote transmission (RTR) bit. The CAN arbitration scheme is called “carrier sense multiple access with collision detection” or CSMA/CD, and assures that the highest priority message is broadcast. Message priority is determined by the numerical value of the identifier in the arbitration field, with the lowest numerical value having the highest priority. Non-destructive, bit-wise arbitration resolves conflicts among competing transmitters. This means that the bus can be thought of as acting like an AND gate: If any node writes a dominant (0) bit on the bus, every node will read a dominant bit regardless of the value written by that node. Every transmitting node always reads back the bus value for each bit transmitted. If a node transmits a recessive bit and reads back a dominant bit, it immediately stops transmitting. Arbitration is illustrated in Figure 3. The RTR bit simply distinguishes between data frames and remote frames. In data frames, the RTR bit must be dominant; in remote frames, it must be recessive

Note 1: It is worth noting that the presence of an Acknowledgement Bit on the bus does not mean that any of the intended addressees has received the message. The only thing we know is that one or more nodes on the bus have received it correctly

Note 2: The Identifier in the Arbitration Field is not, despite its name, necessarily identifying the contents of the message.

Due to the differential nature of transmission CAN is insensitive to electromagnetic interference, because both bus lines are affected in the same way which leaves the differential signal unaffected.

To reduce the sensitivity against electromagnetic interference, even more, the bus lines can additionally be shielded. This also reduces the electromagnetic emission of the bus itself, especially at high baud rates.

CAN Communication Between Two TMS320