How to Interface 7 Segment Display with 8051 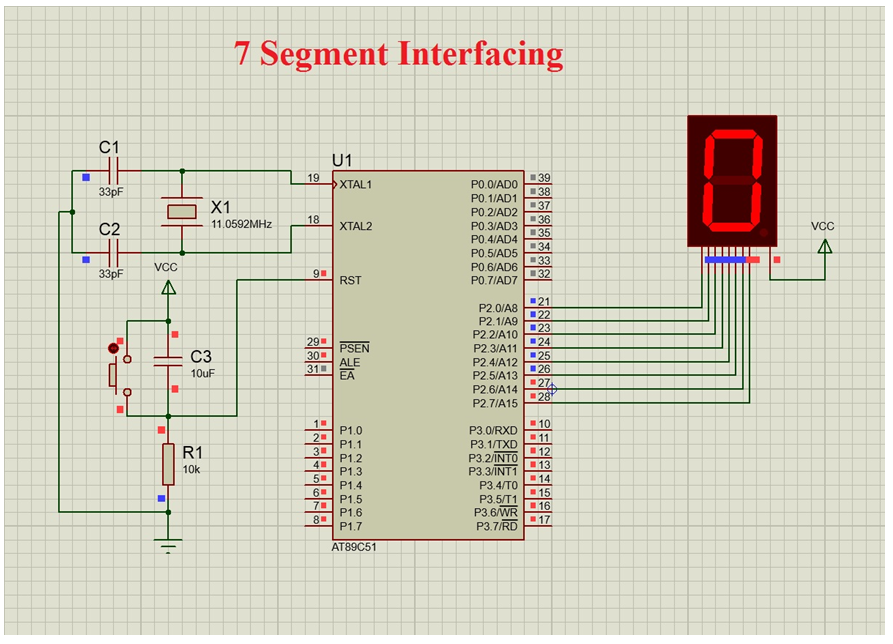 Hi guys, in this article we will see how to interface 7 segment display with 8051 microcontroller.

1. The Common Cathode (CC) – In the common cathode display, all the cathode connections of the LED segments are joined together to logic “0” or ground. The individual segments are illuminated by application of a “HIGH”, or logic “1” signal via a current limiting resistor to forward bias the individual Anode terminals (a-g).

2. The Common Anode (CA) – In the common anode display, all the anode connections of the LED segments are joined together to logic “1”. The individual segments are illuminated by applying a ground, logic “0” or “LOW” signal via a suitable current limiting resistor to the Cathode of the particular segment (a-g).

In general, common anode displays are more popular as many logic circuits can sink more current than they can source. Also note that a common cathode display is not a direct replacement in a circuit for a common anode display and vice versa, as it is the same as connecting the LEDs in reverse, and hence light emission will not take place.

Depending upon the decimal digit to be displayed, the particular set of LEDs is forward biased. For instance, to display the numerical digit 0, we will need to light up six of the LED segments corresponding to a, b, c, d, e and f. Then the various digits from 0 through 9 can be displayed using a 7-segment display as shown.

Although a 7-segment display can be thought of as a single display, it is still seven individual LEDs within a single package and as such these LEDs need protection from over current. LEDs produce light only when it is forward biased with the amount of light emitted being proportional to the forward current.

This means then that an LEDs light intensity increases in an approximately linear manner with an increasing current. So this forward current must be controlled and limited to a safe value by an external resistor to prevent damage to the LED segments.

The forward voltage drop across a red LED segment is very low at about 2-to-2.2 volts, (blue and white LEDs can be as high as 3.6 volts) so to illuminate correctly, the LED segments should be connected to a voltage source in excess of this forward voltage value with a series resistance used to limit the forward current to a desirable value.

Typically for a standard red coloured 7-segment display, each LED segment can draw about 15 mA to illuminated correctly, so on a 5 volt digital logic circuit, the value of the current limiting resistor would be about 200Ω (5v – 2v)/15mA, or 220Ω to the nearest higher preferred value.

So to understand how the segments of the display are connected to a 220Ω current limiting resistor consider the circuit below.

In this example, the segments of a common anode display are illuminated using the switches. If switch a is closed, current will flow through the “a” segment of the LED to the current limiting resistor connected to pin a and to 0 volts, making the circuit. Then only segment a will be illuminated. So a LOW condition (switch to ground) is required to activate the LED segments on this common anode display.

This BCD-to-7 segment decoder/driver takes a four-bit BCD input labelled A, B, C and D for the digits of the binary weighting of 1, 2, 4and 8 respectively, has seven outputs that will pass current through the appropriate segments to display the decimal digit of the numeric LED display.

The digital outputs of the CD4511 are different from the usual CMOS outputs because they can provide up to 25mA of current each to drive the LED segments directly allowing different coloured led displays to be used and driven.

Thanks for reading this article for any assistance or doubts comment below.

How to Interface UART with 8051

How to Interface DC motor with 8051